Compare prices from different websites on HelloMondo and book the best ticket for you. 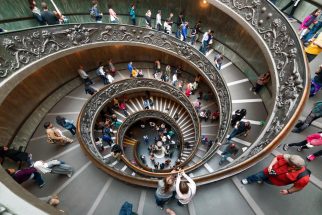 Bramante's "modern" staircase made by Giuseppe Momo in 1932

The Vatican Museums are the public museums of the Vatican City. They display works from the immense collection amassed by the Catholic Church and the papacy throughout the centuries, including several of the most renowned Roman sculptures and most important masterpieces of Renaissance art in the world. The museums contain roughly 70,000 works, of which 20,000 are on display. Pope Julius II founded the museums in the early 16th century. The Sistine Chapel, with its ceiling and altar wall decorated by Michelangelo, and the Stanze di Raffaello (decorated by Raphael) are on the visitor route through the Vatican Museums. There are 24 galleries, or rooms, in total, with the Sistine Chapel, notably, being the last room visited within the Museum.

The visit to the Vatican Museums takes between two and three hours, but you are free to explore all day if you want. To the visit time you must add the time of any queues at the entrance if you have not purchased a skip-the-line ticket. However, if you’re an art-lover who wants to linger in all the galleries, you can easily make a day trip out of your visit. There are courtyards to rest in, plus a café, restaurant, and pizzeria where you can find lunch and snack options, so take as much time as you need.

The queues to enter to the Vatican Museums are probably the longest in Rome.For this reason it is advisable not to go on the last Sundays of each month (when the admission is free) or during Holy Week. It is also advisable to avoid weekends, above all in high season. Choose weekdays and visit the museums between Tuesday and Thursday to avoid the busiest days. The ideal time to go is on weekdays at 1:00 pm. Most people tend to come first thing in the morning to avoid the lines, so this is often the time when you will have to wait the longest. The other way to avoid the lines is to book a guided tour of the Vatican.

One easy pass for the best of Rome: Vatican, Colosseum and St. Peter's Basilica

Exclusivity, privacy, and entertainment, are all at the essence of this tour

What are the Vatican Museums?

The Vatican Museums are one of the most-popular attractions in Rome. Established by Pope Julius II during the sixteenth century, they houses thousands of works of art. The museums are all in the same vicinity, not scattered in different locations. The Vatican Museums are made up of galleries, rooms, courtyards, towers, staircases, chapels, and more.

When were the Vatican Museums built?

The origins of these museums go back to 1503, the year in which the recently named Pope Julius II donated his private collection. Since that moment private families and other popes have enlarged the collection to the point where it has become one of the largest in the world.

Do you have to respect a dress code?

Even if the museums are not places of worship, the same rules apply for their visit so no bare shoulders or knees but sober clothing.

What can you admire inside the Vatican Museums?

The museums are made up of several smaller galleries and rooms, some of which house paintings and sculpture, and some of which are works of art in their own right. From ancient Roman sculptures and mosaics to modern art with religious themes, the Vatican Museums display about 20,000 diverse works. Famous names to watch out for include Leonardo da Vinci, Caravaggio, Vincent Van Gogh, Salvador Dalí, and Pablo Picasso.

Visitors should also take the time to visit the Raphael Rooms, which were commissioned as a suite of apartments for Pope Julius II and feature beautiful fresco scenes in a High Renaissance style. And, of course, you should make sure not to miss the Sistine Chapel, which includes the famous ceiling and The Last Judgement by Michelangelo, in addition to frescos by Botticelli, Perugino, Pinturicchio, Ghirlandaio, and Rosselli.

Useful information for your visit to the Vatican Museums.

Although the museums are located entirely in Vatican territory, their entrance is located in Italian territory, in viale Vaticano 6 in Rome.

To visit the Vatican Museums the times are as follows:

How to get to the Vatican Museums

To reach the Vatican Museums: